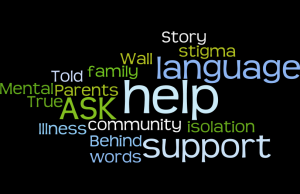 What do we want to talk about?

This is the question my sister, Elin Widdifield, and I ask one another as we prepare to talk about the important stories in our Behind the Wall collection. We don’t present the same talk or readings at every venue because there are so many different facets of parenting and advocating for a loved one who lives with serious mental illness. What we talk about with mental health care professionals is different than what parents of children recently diagnosed can benefit from; then there’s a slightly different conversation when speaking to a broader audience. This subject matter is really important to us, so we have plenty we want to talk about.

As we prepared for the parent interviews that became the stories in our collection, we knew through personal experiences what areas of this parenting journey we wanted to explore. At the top of the list were questions concerning parents’ experience of grief and of course, coping. Other themes consistently bubbled to the surface throughout the course of interviewing including, and unexpectedly, thoughts about how to talk about mental illness.

Though our great-uncle, Dr. Lawrence Collins, was a well-known psychiatrist many years ago, the rest of the family of lay people didn’t have a language to discuss my grandfather’s illness (nor was the illness specifically identified) that caused chaos for his young wife (our grandmother). As he developed a pattern of missed work, his wife hid his illness, covered for him, and endured privately; his children rarely entertained friends at home. They would say he was “sick again” and everyone knew to keep a distance. It is a blessing they all possessed a wicked sense of humor and despite the chaos, recognized my grandfather’s positive qualities as distinct from the sickness.

We now understand alcoholism is an illness; treatment is available and celebrities talk openly about living sober. Yet talking about mental illness hasn’t quite caught up and widespread misunderstanding prevails. In my grandfather’s day, a cancer diagnosis wasn’t talked about outside the family either because, until cure rate statistics rose to foster hope, it signified doom. The stigma around mental illness is largely a result of the odd and frightening behaviors a person exhibits when the illness is untreated. There’s also a small, yet significant factor feeding stigma, one that is similar to how cancer was once viewed; it is a sense of hopelessness associated with the diagnosis. Sadly, what many don’t understand is that a person who is diagnosed with serious mental illness today can reach recovery with early detection and evidence based treatment. Many of us endeavor to address this misunderstanding through more accurate language.

There is an ongoing broader discussion about media and society’s penchant for exploitative and sensational language. I depart from that discussion here to focus on the manner we, as advocates, family members of those diagnosed, and individuals managing their illness use—or fail to use— clear language when talking about brain disorders. Through our interviews with parents, Elin and I saw that the way parents talked about mental illness, specifically and generally, matters a great deal. The way we use language, or lack thereof, reinforces stigma and the walls of isolation.

… managing one’s own mental illness, or supporting another in that challenge, is the most brave and compassionate existence I’ve ever witnessed. It’s a battle fought day in and day out.

Managing any chronic illness is a challenge and support for caregivers is as critical as support for the ill person. Stigma drives people away from providing this support to the supporters. Of a person with mental illness, we’ve heard it been said, “He’s off” or, “She’s a mess” and even worse, “He’s crazy!” In contrast, think about the language of cancer: “He’s fighting bravely.” “She fought a heroic battle with cancer.” Without discounting the bravery attributed to fighting any painful mortal illness, I assert that managing one’s own mental illness, or supporting another in that challenge, is the most brave and compassionate existence I’ve ever witnessed. It’s a battle fought day in and day out.

Elin echoes many other parents we interviewed when she states that mustering courage to be able to say her son’s diagnosis aloud was a milestone and marked a step toward acceptance and subsequent recovery. Verbalizing truth is key to acceptance. One Behind the Wall mother, Tessa, tells us when she accepted his illness, “his whole world got better.” One’s life improves because acknowledgment leads to effective treatment and importantly, the individual’s own acceptance. A person can only manage his illness once it has been accepted without judgment. Elin and I were quite alarmed that several parents we interviewed revealed that other family members, or worse, even the child’s other parent, were in denial about the diagnosis despite very clear symptoms. A subtext of conflict or judgment about the diagnosis among loved ones hinders a person’s chances for recovery.

Talking openly about mental illness is difficult at first. Elin and I found that once we started talking, others came forward gratefully to share their experience. Bianca, a Behind the Wall mother whose son lives with schizophrenia grew tired of skirting the issue. Now she just tells people. “My son has schizophrenia,” she says. “You know, You guys deal with it!” Because Bianca understands that she can’t control how others judge her son but speaking honestly about her experience and his illness is liberating, particularly when there are many more important issues about the illness to address on a day to day basis, like, “How is my son feeling today?”

Even ignoring the stigma, the parent/advocate role is sometimes grueling. A marathon. Communicating a need for help is no different than any other life challenge. Asking for help is an act of bravery, it’s practical and self-preserving.

Language and communication tools are much better than what my grandmother could access. When her husband drank, he was unavailable. The behaviors he exhibited that we now surmise as his mental illness were just “moods”. Sixty years later, when my nephew was diagnosed and at each juncture of his illness, my sister and her husband sent emails to extended family. Yes, that’s right. They talked openly about it. They spelled it out in vivid detail in email distributed to the whole family. Their emails carefully and factually conveyed a clear message: this is happening, please support us, and here are phone numbers and addresses. More recently, the emails speak about incredible progress.

It has been my experience that people really do want to help others in crisis. But, as one Behind the Wall mother reminds us, not all people understand mental illness; while that’s good for them that they have not had to experience the illness, the misunderstanding isolates a family just when community support is needed most. When one Behind the Wall mother, Rebecca, hospitalized her daughter, she didn’t want everyone to know every detail or have to talk about her experience to every person she encountered. But she did want support in the form of being with friends in a setting that was not all about her daughter’s illness. Like my sister, she used email to update friends about Stella’s, progress. She’d say, “I don’t want to talk about Stella’s progress at dinner tonight or church group tomorrow, but here’s what’s going on so you all know…” This way, she framed the type of support she needed, which for her was friendship and normalcy. Getting it all out in the open, limiting speculation and clarifying her own wishes, made it easier for Rebecca.

The journey supporting her son has been long for Tessa. Her son, now in his thirties has a dual diagnoses of substance use and schizoaffective disorder. Tessa is honest and uses humor to manage and cope. Sometimes, during conversations, he’ll even tell her, “I don’t know what I think about that because I’m crazy.” And when he’s not taking his medication or caring for himself properly, she says, “You’re crazy!’” Her friends tell her she shouldn’t say that to her son. But she tells them she’s treating him like a normal person. She purposely uses the same language flung carelessly about by others to create normalcy. She’s also expressing her defiance and challenging the language of stigma. She is declaring her commitment to a fearless, indefatigable, daily fight against mental illness.

My mother once told me, there was a time when people wouldn’t say the “c” word in polite company. Cancer, that is. Perhaps it was because in those days, there was little hope for recovery. But now people discuss their  battle with cancer or whatever illness it may be, openly and often vividly.

Not so much the case for those diagnosed with serious mental illness or for the caregivers and loved ones of individuals living with mental illness. Yet, as with other illnesses, there is hope. But this is not common knowledge because of the stigma around mental illness.

Through our work interviewing parents for our collection of stories entitled, Behind The Wall: The True Story of Mental Illness as Told by Parents, my sister and co-editor, Elin Abercrombie, and I learned there is a whole other subset of high level parenting in our society. These are quiet heroes who have bravely told us their stories, experiences that are not typically conveyed in polite company.

I hope to bring more topics bubbling to the surface for my readers, covering the things hidden behind the wall within the subjects of parenting, family life, and the general human condition. Mostly serious, sometimes less so. Sometimes, there will be guest bloggers who have experiences to share. But always there will be brutal honesty…