← What can Andrew Solomon’s interviews with Peter Lanza really teach us?
Eight things NOT to say to a parent whose child lives with serious mental illness and how to respond if you’re THAT parent. →

Eulogy for Michele: Defining the Success in My Sister’s Life.

Our guest blogger is writer Michael Ross. His sister Michele lived with bipolar disorder and substance abuse. Over time, the side effects of the medications necessary for Michele to function took their toll. In his eulogy for his sister, Ross makes sense of what her much too brief life meant for him and her loved ones. 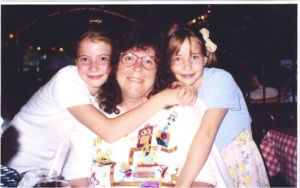 Michele with Kate and Daisy.

While my sister Michele was deathly ill and in limbo, I was struggling to find a way to think about it. My wonderful wife Markie, who has helped me immeasurably with Michele, out of the pure conviction of her belief system said something like, “I think her soul is waiting to break free. And after that happens, she’ll be purely Michele without all the burdens.”

In that moment I felt a sense of release. The situation remained crushingly sad but now it was fitted into the context of nature eventually taking care of us all.

To honestly and righteously celebrate my sister, I turn to the soul of the girl. And to do that, we have to jump back into the 1960s…

Michele was the first person I ever knew who was truly avant guard. Creativity flowed through her. It was “stream of consciousness” in nature. In 1966 when she was fifteen, she won an essay competition and was invited to read her work in front of the congregation at our Temple— Temple Beth Hillel. It was called, “Fairytales in the Grass— a surrealistic sermon.” This was the moment I learned she was avant guard, although I didn’t know what that meant back then. While Michele was on the pulpit spinning her psychedelic metaphors, I sat next to my dad who seemed to have restless leg syndrome. The poor guy was unsettled by the force of what she was saying. I was too young to get her story, but I knew there was music in her words. She finished by quoting the end of the Diary of Anne Frank where Anne says, “In spite of everything, I still believe that people are really good at heart.” There was complete silence… then a stirring in the congregation at which time my dad issued a one-word critique under his breath: “Jesus.” But after the service he was met by a wave of people, a lot of whom were his age and were genuinely moved by his daughter’s speech… And “Jesus” turned to, “Thank you very much.” I realize now he was completely flummoxed. Because she was avant guard.

In her high school years she played piano, guitar, wrote songs. One of them seared itself into my memory. I’ve remembered the first verse my whole life:

Frankenstein’s in the womb of the mothers of invention. He’s silent and still as the luminous rays. As the sun piercing through my eyes to my brain. Telling me there’s no rain.

Now, I still don’t know what that means. But I do know that in 1967 it was as arresting as the song “White Rabbit” by the Jefferson Airplane.  At this time, along with being avant guard, Michele started an alternative spiritual journey from being the girl who was bat mitzvah at Temple Beth Hillel to the relentless Hare Krishna chanter in her room. All night, “Nam yo ho renge kyo.” And then early the next morning, I’d hear her quick footsteps to the front door. She’d open it and look outside at the empty curb in front of our house. She had not been rewarded with a car. So then, back into her room. “Nam yo ho renge kyo…”

In 1969, Michele went to college in Arizona and certain trappings of being avant guard, namely, drinking and taking drugs, overtook the creative part of being an artist. And here’s where I mourn. If she’d applied study and technique to her wellspring of talent, Michele might have become… you could fill in the rest of that sentence in so many ways. But this is where we have to re-calibrate what was success in the life of my sister. And see that her soul, which became weighed down more and more, always tried to find new ways to show itself.

After living in Portland for a number of years, she moved back to Los Angeles in the summer of 1976, admitting that she had addiction problems. A cycle began of staying sober, slipping, rehabbing, slipping. My mom and I wrestled with this new notion of “tough love.” Louise attended to Michele and advocated for her. I’m not saying theirs was the healthiest of relationships, but by God, my mom was steadfast and remained so, as it became clear that Michele’s problem was more than addiction and now included the diagnosis of bipolar disorder, which brought a much heavier challenge. But through all of this, Louise and Michele had a life— dim sum lunches, going to their favorite coffee places, bonding over my familial shortcomings.

Lucky for me I married Markie and we have our beautiful children. They were a tonic for everybody. Michele showed her sweet soul with my kids. When they were little she was “Aunt Michele,” who always made them things and was always interested in what they were doing. They didn’t spend a lot of time together, but my girls loved her. And when they got older, although Michele never explicitly said this to them, she once told me that she hoped her mistakes would keep them from making the same ones. I remember the moment I conveyed this to Kate and Daisy. I was proud of Michele. Proud of my big sister.

Success for her was in the work she did at TobinWorld, this wonderful school for developmentally disabled children. A couple days a week she made them lunch— hamburgers—which she did great her whole life. While the job may have at first been a kindness offered to her, the staff came to truly appreciate Michele. Because the kids loved her. Because she loved them and she’d say, “I get a kick out of ‘em.” She also found success in her work at the dog shelter where she volunteered, grooming and playing with dogs. Like with the kids, it was a pure connection. Most people love dogs. Nobody loved them more than her.

When our mom died in 1997, I became Michele’s conservator. Now that was a weird deal for both of us. Challenging for both of us. It’s not the natural way of things. But, it wasn’t without its humorous moments.

Some years ago, along her spiritual journey, Michele turned for comfort, unfortunately, to the televangelists. I’d give her spending money for lunches with her friends, for movies, Starbucks, and for cigarettes. Periodically, she’d ask for more money more often. When pressed, she’d admit it was for the guys on TV, that sending them twenty-five or fifty dollars seemed like a pretty good deal for getting into heaven. We’d debate this for a while. She’d make her points. I’d make mine. And finally, we would arrive at the same place. I would say, “If you’re gonna buy your way into heaven, you’re gonna do it with your cigarette money.” I’m proud to say she’d always pick tobacco over Pat Robertson.

Now… as I write this, at this point I’m feeling stuck… how do I close out a tribute to a life that seemed too soon to end?

I want to tell you guys, my family, my cousins, that while Michele couldn’t connect to all of us in a way that felt substantial… she was connected to us, in her own way. She always welcomed news about all of you. She always wanted to tell me when she had spoken to Aunt Ruth, or Chris, or Evelyn. She always enjoyed saying that they sent me their love and regards. And she always would tell me when she sent my regards back. Her life was hard work for her. It was often hard work for me. But, with maybe more objectivity than I had while I was her brother/conservator, I can see and appreciate that until recently, Michele was always trying to move herself forward.

In the days since she died, I’ve been listening to the 60s channel on satellite radio. The 60s were her time, and that music connects me to what I remember as her essential self. So, while I know what she was hoping would be her reward, here’s my version of it… It’s 1967 and she’s going to San Francisco with flowers in her hair.

One Comment on “Eulogy for Michele: Defining the Success in My Sister’s Life.”